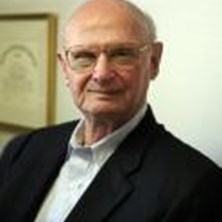 Professor Harry Markowitz has served higher education at UCLA, Pennsylvania, Rutdgers and City University of New York and has been a visiting professor at universities in the United Kingdom, Japan and Israel.

He authored a large number of books and studies. His teaching and research focused on the fields of Financial Science, Mathematical Techniques and Computer Science.

As an academic and researcher he contributed the most: In the development of Financial Science with the theory of "Modern Portfolio Theory". This theory has become a standard topic in university and college courses and is widely used by institutional investors for asset allocation, risk control and performance analysis. In solving large mathematical optimization problems with the development of the technique of sparse matrices. This technique is now standard in production software for optimization programs. In the treatment of productive and communication problems through simulation programs, with the development of the computer language SIMSCRIPT. The SIMSCRIPT computer language has been widely used for computer programming simulations such as factories, transmission systems and communication networks For this contribution, he was awarded the Nobel Prize in Economic Science, and the John Von Neumann Prize. In 2003, the Department of Economics awarded him an honorary doctorate.