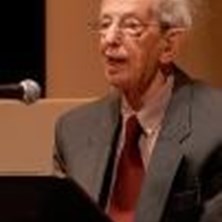 Eric John J. Hobsbawm (E. J. Hobsbawm) was born in Alexandria in 1917 to a British-Polish father and an Austrian-Jewish mother, and studied in Vienna, Berlin, London and Cambridge. In the years of his academic career, Eric Hobsbawm created a milestone project, a pioneer in modern history.

Recognition of his scientific contribution surrounded him with many important international honors. He was a member of the British Academy and the American Academy of Arts and Sciences, an honorary member of King's College in Cambridge and an honorary doctor of several universities in several countries. He taught until his retirement at Birkbeck College, University of London - an environment / inspiration and motivation for his historic work, he admitted - and then at the New School for Social Research in New York. In addition to the famous books "The Age of Revolution, 1789-1848", "The Age of Capital, 1848-1875", "The Age of Empire, 1875-1914" and "Age of Extremes: The Short Twentieth Century 1914- 1991 "has also written the books:" Primitive Rebels "," Labor Man and Worlds of Labor "," Industry and Empire "," Nations and Nationalism Since 1780 "," The Invention of Tradition "," The Jazz Scene "," Uncommon People "," Bandits "and" Globalization, Democracy and Terrorism ", which have been translated into many languages, as well as the extremely interesting autobiography of" Interesting Times: A Twentieth-century Life ". A writer, thinker, academic teacher, social activist, restless and inquisitive spirit and personality who combines speech and action, Eric Hobsbawm has made a decisive contribution to the renewal of the social sciences in the context of the historical approach of modern and after. In 2004 the Department of Economics awarded him an honorary doctorate.